The shallow waters of the Frying Pan Shoals – Graveyard of the Atlantic – made ship navigation treacherous for large vessels. So, in 1854 a U.S. Coastguard lightship was stationed at the end of the shoals. For 110 years, minus a few years during The War Between the States and WWII, crews manned the lightship 24/7/365 throughout all sorts of weather conditions.

In the early 1960’s, the plan to erect a permanent steel structure with a lantern house to replace the lightship began.  The structure was a modified Texas drilling platform, called a “Texas Tower” that was designed to provide housing and support for the crewmen while warning ships of the shallow waters. Construction of the tower was completed November 24, 1964.

The Frying Pan Shoals Light Station was automated in 1979. Repair and maintenance crews were stationed at USCG Station Oak Island to provide emergency and routine maintenance.

The advent of Global Positioning Systems (GPS) and radar systems rendered the light tower obsolete, so the Coast Guard for all practical purposes abandoned the station in 2004 and officially retired the light station.

Frying Pan Shoals is designated a protected reef area, so the original idea of destroying the structure, relocating it, or recovering it for scrap was discarded. In 2010, the government placed the Frying Pan Tower™ up for auction, with the winning bid going to Richard Neal of Charlotte, NC.

Richard had the desire to restore, protect, and preserve the tower. To generate a sustainable funding source, he converted it to an adventure destination to cover the costs of updating, maintenance, and minor repairs.

In an effort to fully restore Frying Pan Tower™, some major changes needed to happen, so it was decided to invite Ecotourists for adventure stays and began making accelerated progress in the repairs!

Today, Frying Pan Tower™ is a labor of love for those who share the same lofty goals for restoring the tower for the purposes of providing safety to mariners in the Atlantic ocean, environmental research and education studies, and shelter to a natural ecosystem for marine wildlife.

All restoration projects are volunteer-driven and coordinated by FPTower Inc. Richard, who divested his ownership interests in the tower in 2018, is focused on managing the Frying Pan Tower™’s Restoration Project through FPTower Inc., a federal and state (NC) registered non-profit organization.

To learn more about how you can volunteer your time and talent to restore Frying Pan Tower™, visit our volunteer page to learn more. 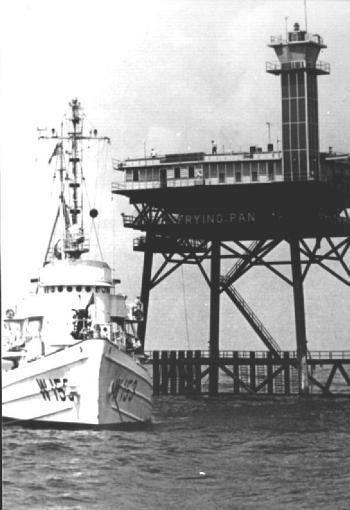